Among the many discussions that have been the buzz among dog trainers and behaviorists recently, a common theme is the topic of understanding dog body language. As professionals working with dogs, not understanding what a dog is trying to communicate to us can lead to serious injury, as we have recently seen happen to a popular television personality.

How can you know just what a dog is trying to say to you? If you want the complete story, watch its entire body. Following are some basic tips for ‘reading’ a dog. By putting different cues together, you may get a better idea of what your dog (or your neighbor’s dog) is trying to tell you.

Ears – there are a variety of ear types and some are easier to read than others, but their general positions are similar. If the dog is communicating deference, the ears will typically be pulled back, or at half-mast in some dogs.  A curious dog will have its ears forward, possibly combined with a head-tilt. If the ears are far forward and the dog is standing tall and leaning forward, that could be a sign of a potentially aggressive attitude.

Eyes – Windows to the soul, this applies to dogs as well.  If you have an affectionate dog at home, you are, no doubt, familiar with the ‘soft eyes’ of the polite, loving dog.  ‘Hard eyes’ that stare directly can be a challenge, while averted eyes, often coupled with a head-turn, mean that the dog does not wish to interact.  This is averted head is commonly seen when a young, rambunctious dog approaches an older dog that does not want to play.

Lips/Mouth – Most people understand that raised lips in a snarl are an aggressive display. However, many dogs also raise their lips in a canine submissive grin. The difference is that the lips are pulled back for the grin instead of forward, and the eyes remain soft or sometimes even closed completely. Again, it’s important to see what the rest of the dog is doing to determine what is really being communicated.

Tail – The movement of the tail is less important than the position. Keeping in mind that some dogs have naturally high or naturally low tail carriages, a very high tail indicates more confidence, while a lowered tail indicates respect or nervousness. A truly happy dog will have its tail at a neutral level – straight out – and wagging widely. And most of us have seen the dogs whose entire bodies wag in the unmistakable sign of joy.

When we put it all together, it’s most important to take things in context. Just as “your dog is the best” can be construed in many ways, depending on the person’s facial expression and which word is most emphasized, so is canine body language. One of the easiest ways to learn is to observe your own dog in situations with which you are familiar. Note the tail, ears, eyes, etc and remember what the overall dog is doing. Thus, when placed in an unfamiliar situation, it will be much easier to understand exactly what your dog is trying to communicate.

Watching other dogs play and interact can also be helpful. Once we understand our dogs’ signals and attempts to communicate, how then should we respond? Of course, the happy dog has an easy answer: pet him or play with him! With the fearful and angry dogs, things are not so simple.

While many people feel compelled to try to help a frightened animal “feel better” by talking in a soothing tone and continuing to approach, this could lead to serious injury for both of you! Frightened animals often lash out in attempts to defend themselves from perceived threats. If a dog appears afraid it is wise to keep your distance. If the dog is unfamiliar, consider calling in an expert such as an animal control officer to handle it. If you are stuck in a small space with such an animal, do not make direct eye contact. If it’s your own dog and he needs help (i.e. he’s injured), you might try covering him completely with a blanket, though he may still bite. 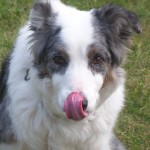 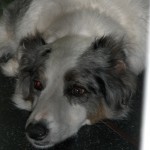 And what if the dog that you are approaching growls? Growling is an often misunderstood signal. While many people view the aggression and feel the need to “prove” to the dog that they are not frightened, or feel that they must remain “dominant”, a growl is an important warning signal. For this reason, modern trainers with the top credentials now recommend never to punish your own dog for growling, and to heed the growl and back off.

I’ll stop here to elaborate on the growl. Consider two people with guns: the first yells at you as you approach, saying “I have a gun, please leave”, while the second person surprises you and shoots you unexpectedly. Which person would you prefer to face? I personally would prefer the person who warns me and gives me the opportunity to leave. This is the person who does not wish to shoot me, but fears that they may have to. So it is with a growl. But if a dog is repeatedly punished for growling, then his warning signal (“back off please”) is eliminated, and he will be forced to bite without warning when his threshold has been breached.

So, what should you do if your dog is growling? In such a case you will be better suited to determine his reasons for growling, and spend some time teaching him that growling it is not necessary. Of course, when in doubt, call in a professional to help you to resolve the issue, and make certain that the methods used do not escalate your dog’s issues.

With other people’s dogs, avoid confrontation in order to avoid injury; step slowly away, keeping your head turned so as not to make direct eye contact. If the dog is on a leash in the control of another person, do not approach that person as it could make it more difficult for them to control the dog.

If you have additional questions about canine body language or how to respond to dogs’ signals, I highly recommend the book, “Canine Body Language” by Brenda Aloff, as well as websites such as Dr. Sophia Yin’s website and other similar sites.